Here is a quick report from Big D the first mate on board Orinoco Flow during the first weekend of Cowes Week 2013.

The crew of 6 plus the skipper and myself met up on Friday evening at MDL Marina in the Hamble. Soon everyone started to arrive thru rush hour Friday night traffic. The stress of motorways and work soon dissolved amongst the tranquillity of the Marina. Once everyone arrived a quick safety briefing on the workings of the boat down bellow was followed by drinks and a meal in the bar in the Marina. 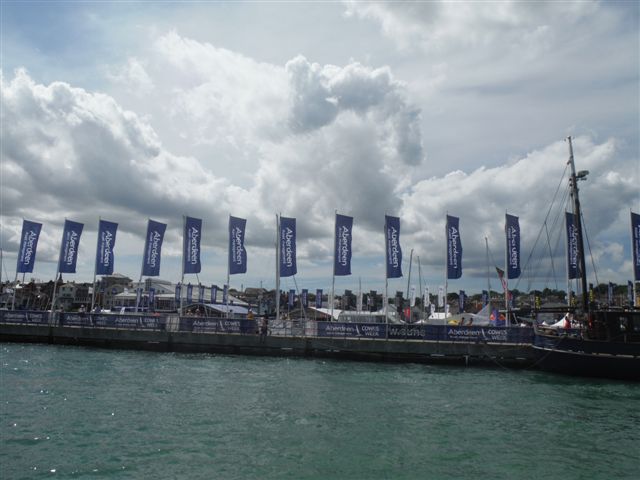 Saturday morning breakfast was relaxed and we slipped our berth around 10am. We were greeted by a nice south westerly breeze at 18 to 22 knts and to top it the sun was out too giving the Solent that typically greeny blue colour that defines it. We soon settled into some practice sailing, sailing on the fringe of the racers around the Solent. We watched a couple of starts to get an idea of what we could expect. That soon spurred on an hour of start practice. Every one settled in to their roles on the boat and in no time we had our starts coming together very nicely.

After the intense start practice a course was set for Osbourne Bay for a well deserved special boat brunch of piping hot sausages, beans, mushrooms and cherry tomatoes. The calmness of Osbourne Bay would prove to be the polar opposite of what was to come. Once everyone had rested we slipped anchor and got down to some more race training, this time concentrating on mark roundings. We practiced into the late afternoon enjoying the rapidly emptying Solent as the racers had finished, so we followed suit and headed towards our berth for the night.

As we entered Cowes we could hear the hustle and bustle of the town and enjoyed motoring up Cowes river listening the live music ashore. With walk ashore berths in very high demand we tied up onto a floating pontoon upstream. Once everyone was out of their sailing gear the snacks and dips didn’t disappear as quickly as the Gin and Tonics. To say the mood was good would have been an under statement, all had an excellent day on the water and I was feeling confident about the race in the morning as we had an excellent team ready to go.

Half the crew went ashore to get some more Gin and ice, whilst myself and Louise prepared the evening meal. On this note the catering supplied by Yacht Force was the best I’ve had on a chartered yacht. Considering the size of the oven I would say we did really well and the starter of whole baked camembert and warm baguettes would have given any restaurant ashore a run for their money! 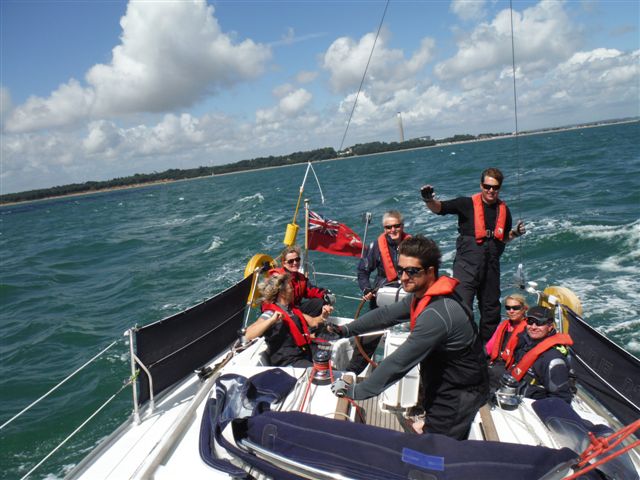 Sunday morning came by far too quickly and once the finishing touches had been made to the boat to get her race ready we set off. Motoring out of Cowes was frantic boats going every where, with the car ferry leaving we tucked in behind her to get a clear run out into the sailing area. After a short practice and boat tuning we headed to our start line.

Having imprisoned Buster below decks with one other brave volunteer to do the navigation we set about putting all our start practice on Saturday into action. And all I can say is we absolutely nailed the start with the most risky strategy of a port tack flyer. Meaning we had to cross in front of the rest of the fleet who were on starboard tack meaning they had the right of way and we’d have to get out of the way of them.

Unfortunately our start was much better than my interpretation of the sailing instructions, as I had given the navigation team of Buster and Phil the wrong VHF channel. This meant we were now in the position of leading the fleet and not knowing where our first mark was! After quick phone call to Forrader one of the other yachts in our class we had our course. We rounded the first mark in 2nd position and set off down wind. Unfortunately we could not practice with our spinnaker the day before, so we couldn’t fly it for the down wind runs, a move that would cost us much precious boat speed but we simply could not risk trying it out for the first time on a very busy race course. 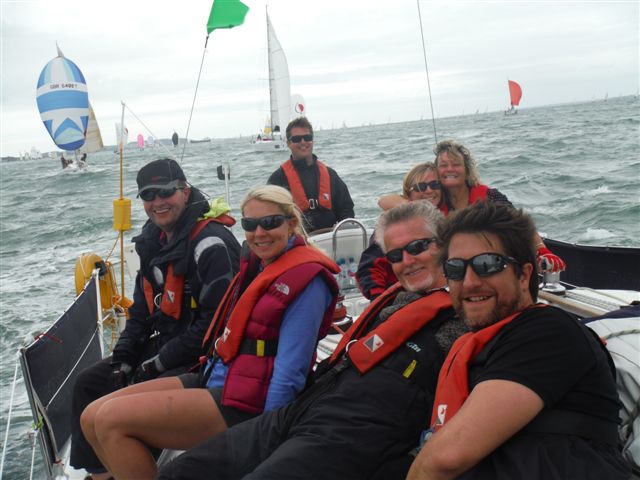 The rest of the racing was very close with larger racing yachts flying past us only meters away, and the upwind legs proved just as close with us passing with in a couple of meters away from other yachts. All very exciting! At the final mark rounding we had Forrader hot on our tail, but with a faster racing yacht squeezing in on the inside line we had to play it safe and give them water around the mark. But this gave Forrader a chance to pull up next to us. The run back down to the finish line saw us swapping placing with Forrader many times as we hugged the Island shore to stay out of the tide. Near the end of the finish Forrader was in the lead, but our tactic of throwing bags of sweets on to their deck saw their crew distracted just long enough for us to overtake them and finish ahead of them on the line. Thank heavens for Haribos!

We finished 8th in our class which I think was an excellent achievement, seeing we had a boat full of people who’d never sailed together before. And to top it all the skipper of Forrader C.V. includes being a world champion in racing, solo round the world yachts man and holds couple of world records in sailing! – he also skippers for us from time to time so a good bit of banter was going on as we were neck and neck!

PI had a great weekends sailing with an even better mix of like-minded people, and my only regret was I was dropped off in Cowes to make my short journey home as I live on the Island. This meant I missed out on swapping stories with the rest of the crew about our race on the way back to the Hamble.

The weather was on our side, the wind blew, the fun was there and everyone had a blinding time! We look forward to having everyone back on board soon.